Still, more than 90,000 Canadians and 30,000 Ontarians, filed a bankruptcy or consumer proposal in 2021. Our most recent bankruptcy study provides insight into who was filing insolvency during the pandemic and why.

As required by law, we gather a significant amount of information about each person who files with us. We examine this data to develop a profile of the average consumer debtor who files for relief from their debt (we call this person “Joe Debtor”). We use this information to gain insight and knowledge as to why consumer insolvencies occur. Our 2021 consumer debt and bankruptcy study reviewed the details of 3,900 personal insolvencies in Ontario from January 1, 2021, to December 31, 2021, and compared the results of this profile with study results conducted since 2011 to identify any trends. 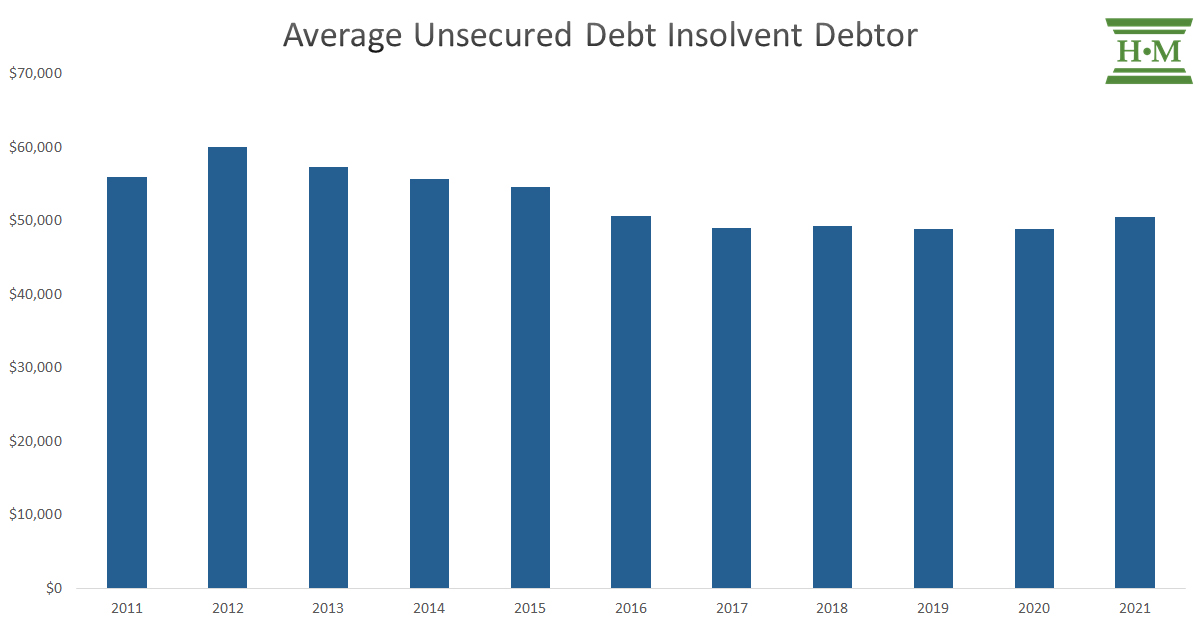 Canadians were less likely to file a bankruptcy or consumer proposal due to credit card debt and personal loans in 2021. Average credit card balances among all insolvent debtors declined 9.3% compared to the prior year, while personal loans fell 2.0%. This is consistent with overall consumer debt behaviour during the pandemic where consumer credit, particularly credit card debt, fell as households paid down balances and borrowed less.

What drove the increase in average unsecured debt in 2021 was an increase in tax obligations and student loan debt among insolvent debtors.

Tax debts have returned as a primary debt driver of consumer insolvencies in 2021, with 4 in 10 insolvent debtors owing taxes at the time of filing. This is despite a slowdown in collection action by the Canada Revenue Agency (CRA) and the implementation of a temporary interest holiday on past-due taxes.

Tax debtors owed an average of $19,776 in taxes and interest, up from a low of $15,866 the prior year. Taxes owing can include personal income tax, HST, source deductions and property taxes. Much of the increase in tax debtors in 2021 was due to obligations created by CERB and CRB payments made in 2020 with no or insufficient tax withheld at source. Additionally, many self-employed and small business debtors stopped making HST payments to manage cash flow during the pandemic. With prolonged lockdowns and reduced revenue, these individuals were unable to catch up on skipped remittances.

We believe that this increase in tax insolvencies is the tip of the iceberg. We expect three changes in 2022 that will likely increase tax-driven insolvencies even further:

Student loan repayment has been an increasing reason for filing insolvency since we began our study in 2011, reaching a record level in 2021 with 22.3% of insolvent debtors having student loan debt. 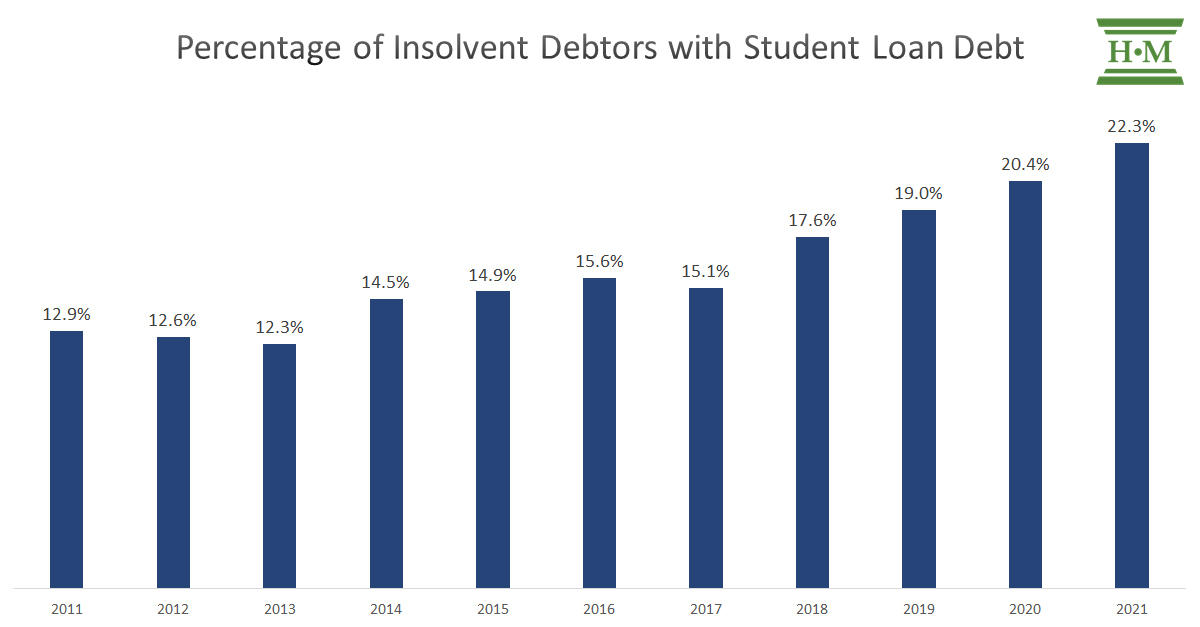 The federal government has waived interest on Canada Student Loans until March 2023. They also made repayment assistance programs easier to access, lowering or eliminating repayment needs for lower-income households. OSAP payment deferrals were available from March 30 through September 30, 2020. Despite this, job insecurity has created a financial environment that makes repayment of student loan debt impossible for an increasing number of graduates.

Average student loan debt among those filing with student loans was $17,005, up a staggering 11.5% and the highest level since we began our study in 2011. Payment deferrals may have contributed to this increase. On top of this, a student loan debtor owed an additional $35,107 in credit cards, bank loans, payday loans and other unsecured debt. Student debtors are highly likely to turn to payday loans, with 44% carrying at least one payday loan.

It is important to understand that an insolvent student debtor is not a recent graduate. She (61% of student debtors are female) is, on average, 36 years old and has been out of school for 13 years or more. Under Canadian bankruptcy law, student loan debt is not automatically discharged by bankruptcy or a consumer proposal unless the debtor has been out of school for at least seven years.

Student loan debt is a problem that is not going away. The pandemic has made repayment conditions worse for many millennials who are more likely to work in precarious employment impacted by Covid-19 lockdowns.

Below is a summary of debtor characteristics from our 2021 insolvency study.

The pandemic has changed the work profile of the average debtor. Historically, 80% of insolvent debtors were employed at filing. In 2021:

Almost one-half (47%) of all debtors listed job loss, business failure or income reduction as a primary cause of their insolvency.

Insolvent debtors in 2021 were left with just $203 a month (a record low) to pay interest and principal payments on $59,183 in consumer credit. The interest alone on this level of debt for the average debtor amounts to more than $1,200 per month.

Canada’s average debt-to-disposable income ratio was 177.2%1 in the third quarter of 2021. This number includes both mortgage debt and consumer credit. The consumer credit portion of this ratio was 38.2%2. The average insolvent debtor had a consumer debt-to-income ratio of 190%, more than five times the national average.

Below are some highlights of key debtor characteristics by age group.

Debtors in this age group were more likely to be male (54%), and three-quarters (75%) were single.

Debtors 18 to 29 years old were most likely to use payday loans, with more than one-half (52%) carrying at least one payday loan at the time of insolvency. One-third (33%) carry student debt, although their student loan balances are one-half that of debtors aged 30 to 39.

1 in 5 (20%) were unemployed at the time of filing, the highest among all age groups, yet average income among those aged 18 to 29 increased 1.2%, likely because of continued pandemic supports. Debtors in this group were most likely (46%) to report job and income loss as a primary cause of their financial problems.

Debtors aged 18-29 were also most likely to carry negative equity vehicle loans. Of those with an encumbered vehicle, almost 2 in 5 (37%) owed more than their vehicle was worth, the highest of all age groups.

Debtors aged 30 to 39 continue to make up the highest percentage of those filing insolvency, accounting for 32% of all filings. They owed on average $47,251 in unsecured debt, up 2.2%.

Debtors in this age group are evenly split by gender. Additionally, 52% are single, while 22% are single parents.

Debtors in this age group were more likely to be female (52%) and reported the highest percentage of single-parent households (24%, 33% among females in their 40s). This age group was most likely to cite marital issues (20%) as a reason for their financial difficulty, with little difference between male (19%) and female (21%) debtors.

Debtors in this age group also reported the largest drop in income, with debtor income down 4.3% and household income down 4.7%. They were most likely to be self-employed (9%), with 41% filing with tax debt.

Insolvency filings among those aged 50 to 59 fell to 16% of all filings, the lowest level since we began our study in 2011. Debtors in this age group owed an average of $59,766 in unsecured debt, up 10.4%, the largest growth rate among all age groups.

Debtors in their 50s were more likely to be male (54%) and were most likely to be divorced or separated (35%).

Debtors aged 50 to 59 had the highest average payday loan balances ($7,862) among all age groups. However, they also had the highest drop in credit card debt, down 7.2%.

Debtors aged 60 and older accounted for 12% of all insolvencies. Senior debtors were more likely to be female (53%) and are relatively evenly split by marital status (28% single, 33% married, 27% divorced).

Debtors in this age group have the highest level of unsecured debt at $61,223. Credit card debt accounted for 34% of their total unsecured debt, the highest among all age groups, although average balances fell 6.1%. They also had the highest dollar amount of tax debt – $44,410 among those with tax debts (39%).

The trend continued towards gender parity in insolvency filings in 2021, with 49.3% of insolvencies filed by women, the highest rate since we began our study. 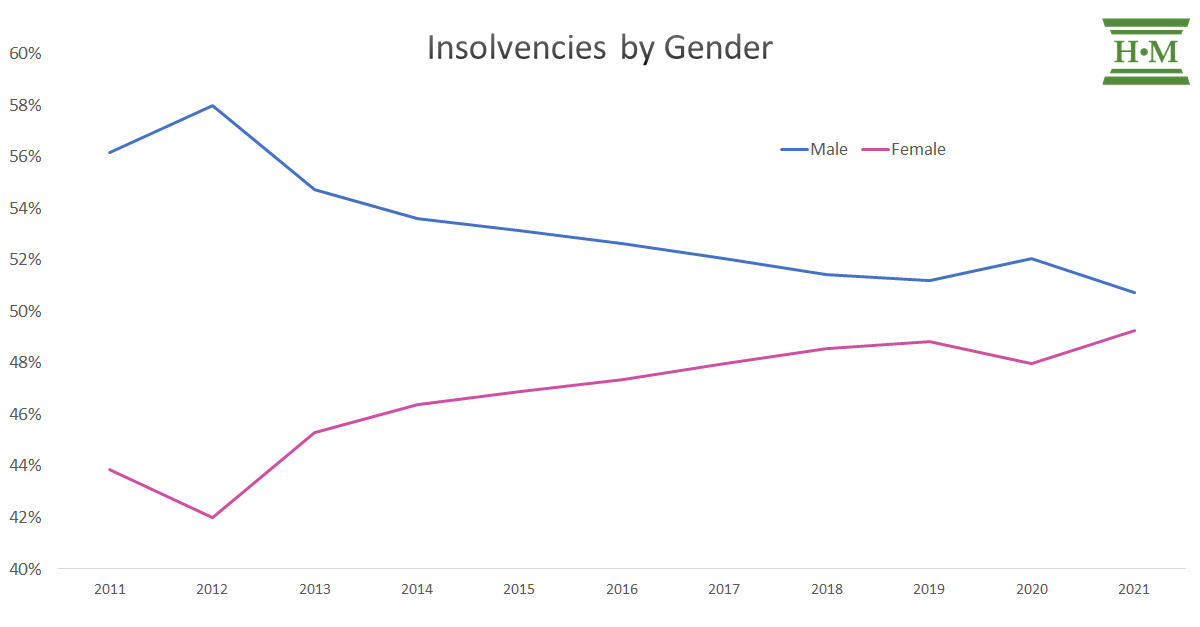 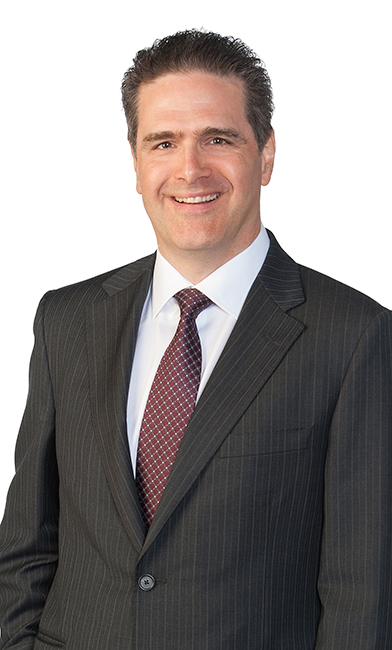 Doug was inspired to bring his financial experience to work by helping individual people not corporations rebuild their financial future. Doug advocates for consumers needing debt relief to ensure they receive a fair and respectful debt management solution. He regularly comments in the media including publications and networks such as Canada AM, Global News, CBC, The Globe and Mail, The Toronto Star, Business News Network, The Financial Post and CTV News. Doug also posts regularly to our blog, on Twitter, Google+, and Huffington Post Canada.

Ted Michalos strongly believes that debt management advice should be delivered without gimmicks and without tricks. He is enthusiastic about ensuring clients understand all of their options and that Hoyes Michalos helps them develop a custom-tailored plan to deal with their debts. Ted is a prolific writer, contributing answers and advice on our blog and on several insolvency and debt relief sites, including Advisor.ca. He has appeared as an expert on bankruptcy and debt-related matters including appearances on CBC News, Global TV and Business News Network.

Hoyes, Michalos & Associates Inc. is a Licensed Insolvency Trustee firm that has provided personal bankruptcy and consumer proposal services to individuals in Ontario since 1999. Co-founded by Doug Hoyes and Ted Michalos, we are one of the largest firms in Canada practicing exclusively in the area of personal insolvency. With offices throughout Ontario, Hoyes Michalos provides real debt management solutions to help Ontarian’s climb out of debt.