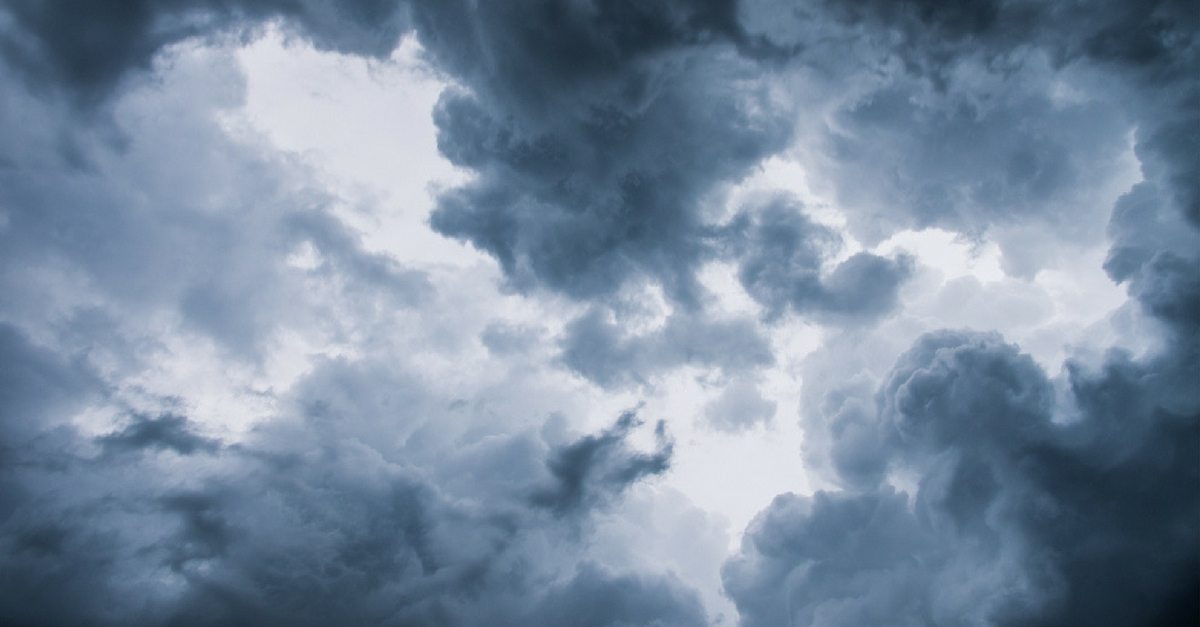 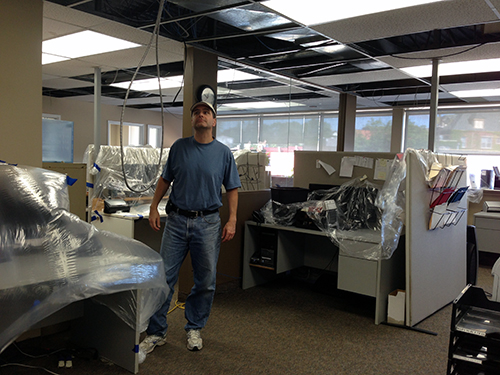 According to Environment Canada the storm just before midnight on July 27 was not caused by a tornado, but instead was caused by a “downburst“. Perhaps, but at our office in Kitchener the damage sure looked like a tornado had hit. 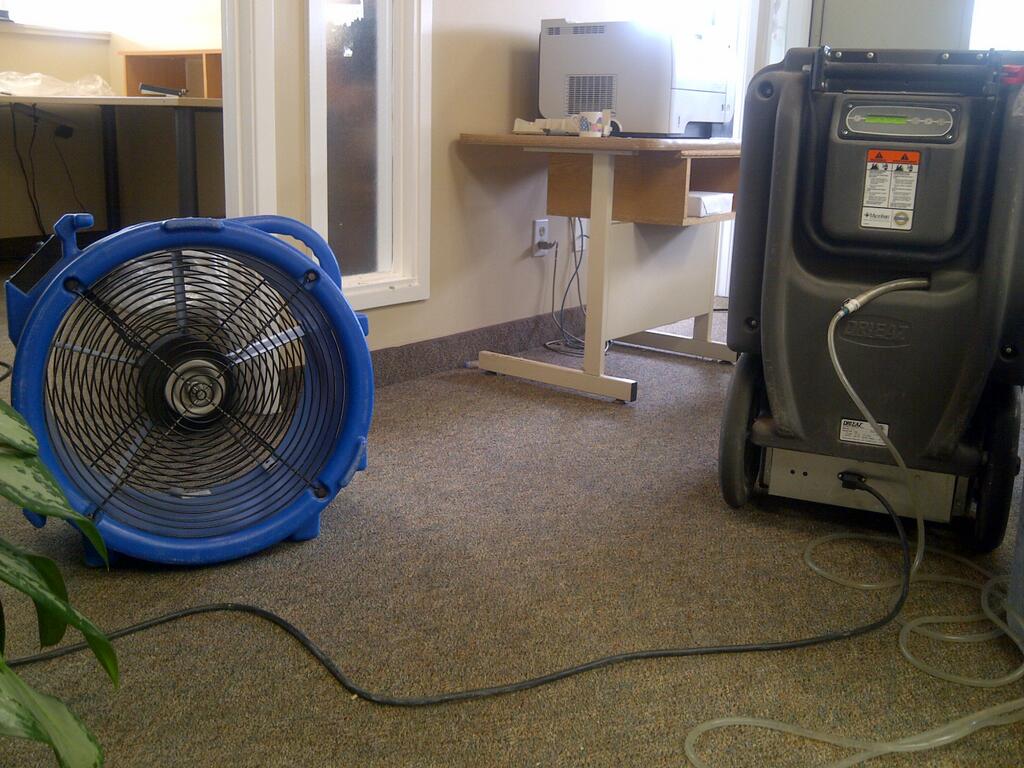 When I arrived at the office on Sunday morning I got to see the damage first hand. Fortunately the crew from First Response Restorations in Kitchener arrived in the middle of the night to secure the premises.  They removed the damaged ceiling tiles, put plastic tarp over our computers, and installed large fans and de-humidifier units to dry up the water.

According to our landlord and his team, a very severe storm hit town late Saturday night, and hit the edge or our building.  Two of the air conditioning units on our roof were ripped off, and one of them landed just beside the fire hydrant on King Street! Fortuntately there were no reports of serious injuries; if this storm had hit in the middle of a working day the consequences could have been disastrous.

The most urgent concern is that most of the roofing material on our flat roof, including the tar and the stones, was blown off (and a lot of it ended up in the parking lot).

Our landlord called the roofers, and by late morning they were busy installing a temporary waterproof membrane on the roof in an effort to keep us dry in the event that further rain falls over the next few days.  It’s likely that the roof will require extensive repair. 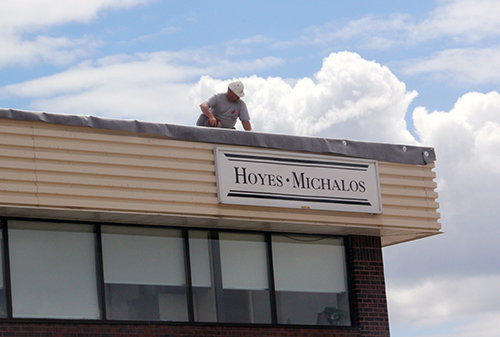 Our building was not the only one damaged.

From the hallway leading to our second floor office you can see south across the train tracks to the buildings north of Victoria street.  A building on Joseph Street was severely damaged; the back wall is half gone: 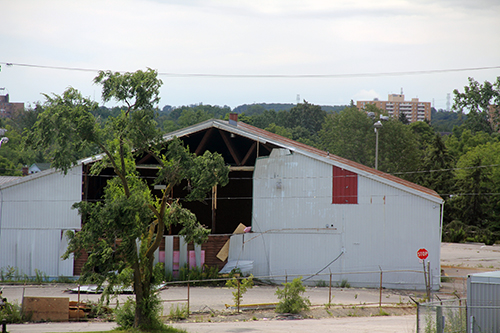 Half the building wall is gone

Here’s a wider view, showing the Go Train’s parked at the Kitchener layover yard just behind our office, and the building damaged in the distance.  The building to the left should have three large overhead doors; two of them were ripped to shreds: 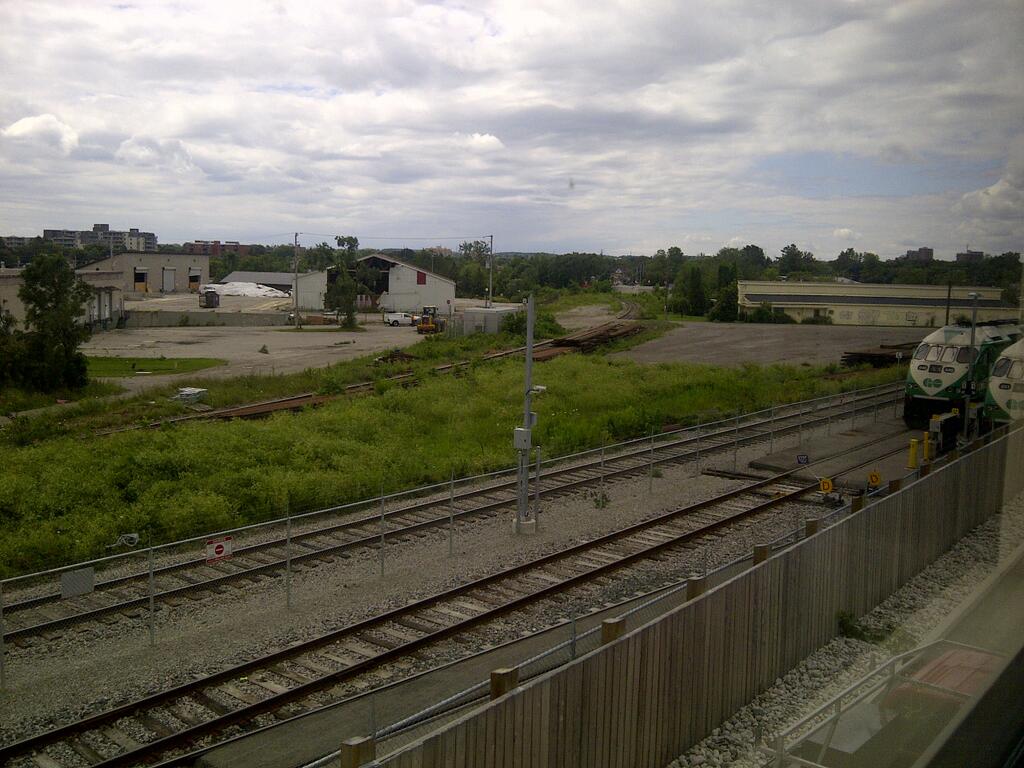 So what do I conclude from my experience spending Sunday at the office dealing with storm damage?

Stuff happens, and there is nothing you can do to prevent a tornado, or “downburst” that rips off your roof.

Fortunately we did have a disaster recovery plan.  All of our data is backed up offsite, so even if the building was destroyed we could still access our data.  We have insurance, so even if all of our computers and furniture was destroyed, we could replace what was lost.  It would take time, but it would be done.

However, I suspect I will spend some time over the next few weeks considering ways to be even more prepared in the future, and I think that’s a good exercise for all of us.  If your home or business was damaged, do you have a disaster recovery plan?  Do you have cash in the bank to deal with storm damage issues, or would you have no choice but to rely on borrowing to get through the crisis?  If your only plan is to borrow, now is the time to deal with your debt so that you can be prepared for life’s unexpected downbursts.