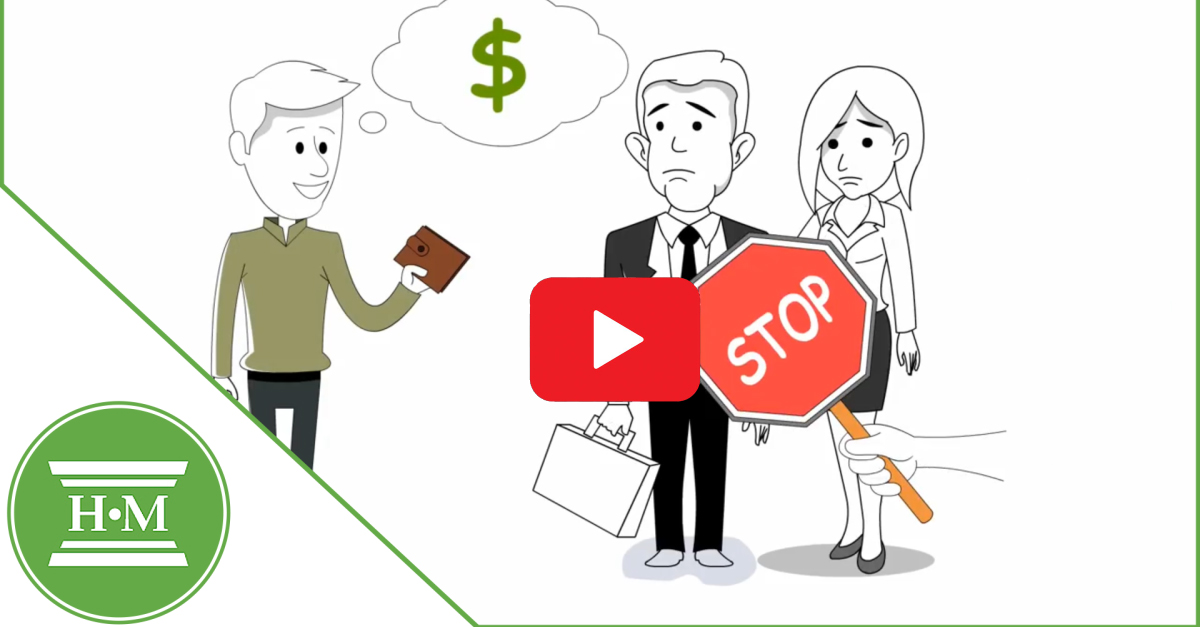 If you’ve reached the point where you are ignoring calls or letters from collection agencies, in addition to the emotional effects of your debt, there can be legal ramifications of ignoring collection calls as well. If you don’t pay your debts, taxes or child support, your creditors can take your case to court to obtain a wage garnishment. This order can force your employer to send up to 20% of your wages to your creditors to repay your debts (50% for child support). For many people, this is embarrassing and often damages their reputation at work.

People often refer to this action as having their wages “garnished”, but the correct legal term is a garnishee or garnishment.

In order to garnishee your wages in the Province of Ontario, your creditor must first sue you in court to obtain a judgement order validating that the debt is indeed yours and how much is owed.  Once they receive a judgement against you, your creditor can then obtain a garnishment order which they will send to your employer.

Once they receive a notice of garnishment, your employer is obligated to withhold funds under the garnishee until either the amount is paid in full, the creditor rescinds the order or you file a bankruptcy or proposal to stop the wage garnishment.

Who can garnish your wages in Canada?

Your salary can be garnished for any unpaid debt including tax debts, student debt, outstanding bill payments and bank loans.

Depending on the type of debt, certain creditors do not have to go to court to garnish your wages:

What Ontario garnishment rules should I be aware of?

There are some specific Ontario garnishment rules that you should know if you receive notice that your wages will be garnisheed.

How much of my wages can be garnisheed?

According to the Ontario Wages Act, the maximum a creditor can garnishee is 20% of your pay and up to 50% for child support. The court will decide how much is taken from your paycheque based on your personal financial situation and other garnishments that may currently be in effect.

Can my employer fire me for a wage garnishment?

No, your employer cannot terminate you or demote you if they are given a garnishing order for your wages.

Can a collection agency garnish my wages?

Yes, a collection agency can sue you for an unpaid debt in Ontario in order to enforce collection of that debt. Like any creditor, they must first file a lawsuit to obtain a judgement order, then apply for a garnishment order.

The answer is yes, however typically payday lenders instead rely on something called a voluntary payroll deduction form you signed when you borrowed the money. However a voluntary wage assignment is not the same as a legal garnishment order and here’s why:

If you signed a voluntary agreement to allow payroll deductions you have the right at any time to revoke your permission.  Further, you employer is not required to make the deductions (even if you want them too) if they don’t want to.

Can I stop a garnishment on my own?

The only way you can stop a wage garnishment on your own is to wait until your debt is paid off via the garnishee, or if your creditor agrees to stop it. However, if one of your creditors has gone through the effort of garnisheeing your wages, they are unlikely to halt the garnishment if you offer to repay your debt. This is because they usually only garnishee people who have a history of non-payment, or whom they believe will not pay for some reason.

You’re in debt and one of your creditors is threatening to garnishee your wages or is already having money taken out of your pay. The good news is that it is possible to stop a wage garnishment. Before an employer can take money from your pay on behalf of a creditor, they must receive a legal garnishment order. To obtain a garnishment order, creditors must follow a legal process. Generally, they must first get a court order against you for the debt in question. Before the court grants an order, you can dispute the claim or pay your debt in full. In Ontario you have 21 days to do so if you don’t make a payment arrangement, or successfully dispute the claim, your creditor may be granted a court order, which would then allow them to apply for a garnishment order against your wages. Once your employer receives a garnishment notice, they are required by law to make deductions from your paycheck until the debt is paid in full, or they receive legal notice to stop. You can still stop a garnishment even after that point by filing a bankruptcy or consumer proposal, which will automatically protect you under the Bankruptcy and Insolvency Act from actions taken by most creditors. This will stop a wage garnishment even if you’re wages are already being garnisheed. A consumer proposal or bankruptcy in Canada must be filed by a Licensed Bankruptcy Trustee. Once it’s filed your Trustee will notify your employer immediately and the garnishment will stop. A consumer proposal or bankruptcy can stop a wage garnishment from a bank, credit card company, or a payday loan company. It even stops requirements to pay from the Canada Revenue Agency. To learn more about bankruptcy and consumer proposals and how they can help you stop a garnishment and eliminate your debt once and for all, contact one of our licensed professionals at Hoyes Michalos for a free consultation.

How does bankruptcy help stop a wage garnishment?

A consumer proposal or bankruptcy can stop a garnishment order, even if your wages are already being garnished. The only exception is an order for unpaid child or spousal support.

A bankruptcy or consumer proposal are both a legal process that provide for a stay of proceedings which stops all creditor actions, including a wage garnishment.

Remember, the longer you wait to deal with your wage garnishment, the more money you will lose from each of your paycheques.

If you work with a consumer proposal and bankruptcy professional like Hoyes, Michalos & Associates, we can often have a court order sent to your employer to stop wage garnishment within a few hours.

If you’ve found yourself threatened with a wage garnishment, or are already being garnisheed, call or email us immediately to start talking about your options.

To stop a garnishment now, eliminate debt and get creditor protection contact us to book a free, no-obligation debt consultation.