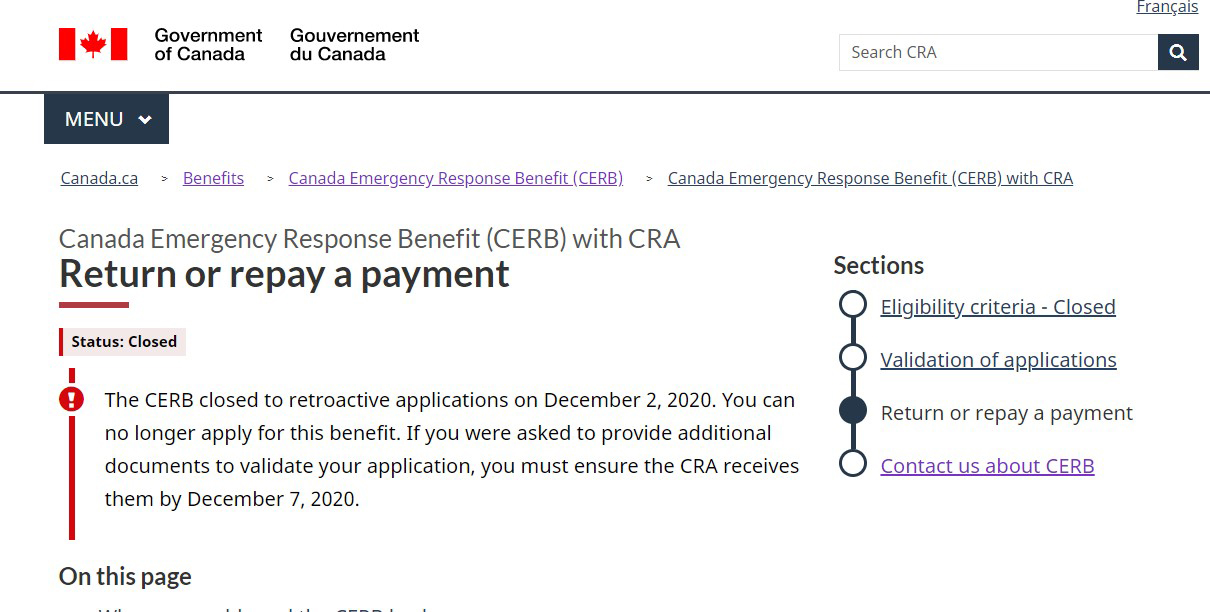 Is CERB dischargeable in bankruptcy?

The Government of Canada is beginning to recover Canada Emergency Response Benefit (CERB) payments where it has been determined that it was paid erroneously or was an overpayment.  The Office of the Superintendent of Bankruptcy (OSB) has told us that erroneous or overpayment of CERB are provable claims in bankruptcy (or a proposal). You can file bankruptcy, or a consumer proposal, to eliminate CERB debt.

Erroneous or overpayment of CERB is a releasable debt in the event of an insolvency (bankruptcy or consumer proposal) given that it is to be treated as a debt owed to the Crown pursuant to subsection 13(2) of the Canada Emergency Response Benefit Act (CERBA).  An erroneous or overpayment of CERB does not automatically constitute a debt that survives discharge under section 178 of the Bankruptcy and Insolvency Act (BIA). Section 178 outlines very specific debts not released by order of discharge, and CERB debt is not listed in this section. Debts that are not forgiven include court fines, support payments, debts due to fraud, for example. As a result, CERB debt is discharged by bankruptcy, unless these payments were obtained due to fraud.

The Canada Revenue Agency (CRA) had previously interpreted self-employment income eligibility guidelines for CERB to mean net income, not gross income, which resulted in some self-employed workers receiving a notice of CERB repayment based on income levels.

After significant public outcry, the government issued an update on February 9 announcing that self-employed individuals who applied for CERB and would have qualified based on their gross income will no longer be required to repay the benefit provided they met all other eligibility requirements.

This change comes after weeks of speculation and criticism of the CRA for not providing clear guidance regarding the gross versus net income test. There is no longer a need to file adjustments to 2019 tax returns to reverse previously claimed deductions in order to increase net income.

If you must repay CERB because you were otherwise ineligible, or have taxes owing, interest relief is available until April 2022 within specified conditions. If you are unable to pay, tax obligations due to CERB remain dischargeable in a bankruptcy or consumer proposal.

If are concerned you may owe the CRA for pandemic related benefits, including repayment or tax obligations, talk with us about your options. Consultations are free.

The Canada Revenue Agency has begun issuing formal collection letters for CERB repayment to recipients who may or may not have been eligible for the payments they received.

You may have received a letter from CRA regarding CERB payments to be paid back along one of two themes we’ve seen to date:

When it was rolled out, the Canada Emergency Response Benefit allowed Canadians whose employment was directly affected by COVID-19 to apply for benefits through Service Canada, or through the Canada Revenue Agency (CRA), but not both. CRA has issued a clear collection notice demanding repayment where someone has received payments through both portals.

To be eligible for CERB, you must have earned employment or self-employment income of at least $5,000 in 2019 or in the 12 months before applying.

To verify your income, CRA will look at your 2019 tax return, and any T4 or other income slips sent into the CRA.

If they cannot verify your income, you will receive a letter that states:

Based on the records we have at this time, we cannot confirm that you meet this requirement.

If you have earned income that meets the qualifications, and if you haven’t already done so, simply file your 2019 tax return.

Unfortunately, the rollout of CERB led to a lot of confusion as to income eligibility. The following income is not considered employment or self-employment income:

Based on phone calls to our office, there may be a significant number of Canadians who collected CERB, assuming these forms of income qualified.  Many were under the impression that if I cannot get a job due to COVID, I can collect CERB. However, technically that was not the case. For example, if you were on disability and did not return, you did not qualify for CERB.

How will CRA collect?

The CRA has strong collection powers. Currently, they seem to be taking a softer approach to the collection of CERB overpayments.

CRA is encouraging Canadians who were not eligible for benefits to repay CERB voluntarily. They understand that many may have made an honest mistake and appear to be waiving penalties and interest on overpayments – at least for now. And this assumes that you received CERB incorrectly through an honest error.

If you do not remit payment by December 31, 2020, CRA will issue a tax slip, which just means they say you owe that amount to CRA.

This means CRA can:

To date, the CRA has not threatened stronger collection action, but that may change.

How a CERB overpayment will affect your future taxes

There is another complication if you need to repay your CERB but do not do so before December 31. Because CERB is taxable, any payments you receive in 2020 that you have not returned before December 31 will be included as income on your 2020 tax return. This means you will have to pay tax on the full amount of CERB you received in 2020. You won’t be eligible to get a ‘refund’ for this tax if you pay it back next year until you file your 2021 tax return – an entire year later.

What if you can’t repay CERB?

The Canada Revenue Agency has certainly indicated its intention to verify CERB benefits and claw back as much as possible where the recipient should not have received any payments. However, they have also indicated that they understand that many who applied incorrectly did so honestly.

We recognize that some people who applied may have later realized they were not eligible.

If you have received a collection letter from the CRA, you have three options: