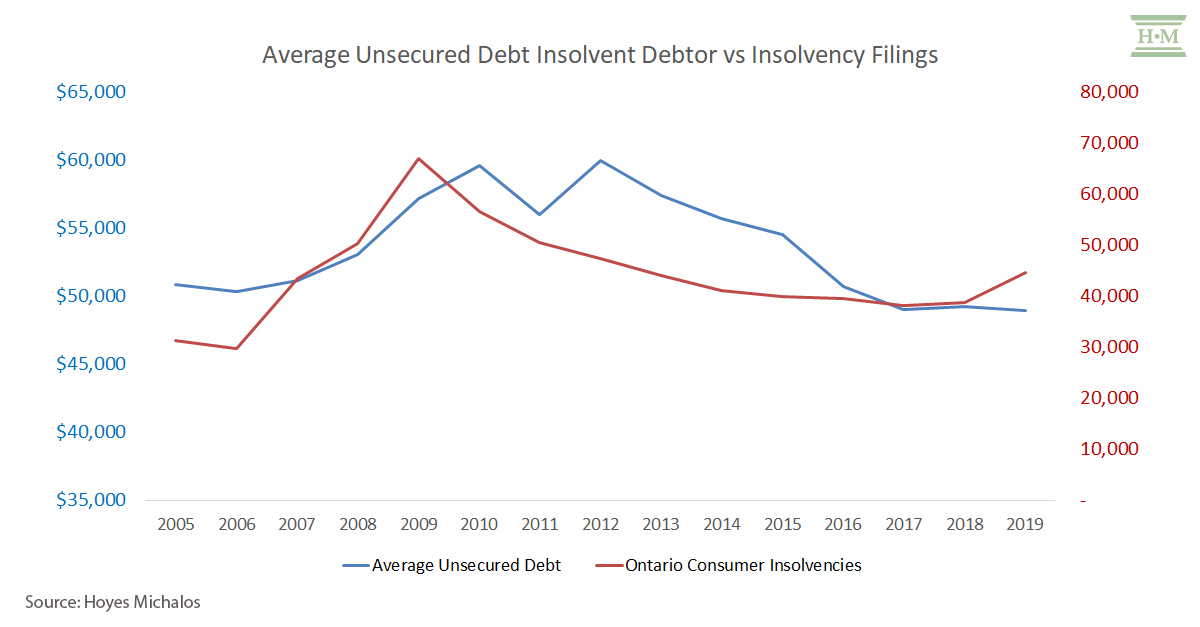 Before the economic impact of the shutdown and social distancing, Ontario was already feeling the financial effects of too much debt. In the six months before March 2020, when businesses began to close and employees were sent home or laid off, Ontario insolvencies were growing at an annualized rate of around 18%.

Over a rather rapid period of two weeks, the traditional insolvency cycle turned on its ear. COVID-19 forced many people into financial survival mode. Rather than worrying about whether or not they would ever be able to pay off their debts, Canadians are stressed about meeting the next rent or mortgage payment, and how to pay for food. The tone of calls to our office changed. Fewer were calling to explore options to deal with their debt; more were calling to ask what would happen if they missed a payment.

However, with courts closed, and creditors limited in terms of legal collection options, insolvency filings are, for the most part, on hold. I expect that insolvency filings could be down 20-25% in March and perhaps as much as 60% in April and possibly May.

This decline will be short-lived. We may have a delayed start, but we will see recession level growth rates for consumer insolvencies as we head into late summer and early fall.

In the 2008-2009 recession, year over year insolvencies in Ontario increased at a peak rate of more than 40%. While we don’t know precisely how high insolvencies will climb, there are certainly some expectations we can foresee based on what we know happened following the last recession.

Based on our bankruptcy study, average unsecured balances among insolvent debtors rose in the two years following the 2008-2009 recession. These balances remained relatively steady through to 2012 as severe debt problems triggered by the downturn worked their way through the insolvency system. In other words, people didn’t just up and file insolvency as soon as they returned to work. The economic impact on families of the resulting job losses was felt for years.

After several years of declining unsecured debt balances, we expect to see a similar rise in average insolvency debt over the next year or two. It is also likely that this rise will be even greater this time around. COVID-19 was a quick shock to the system. No-one could anticipate the large number of workers who lost their jobs, virtually overnight. People could not prepare.

With less ability to pay, many individuals will make partial payments on credit card debt and other obligations, resulting in growing rather than declining credit balances. Delinquencies will increase. While some credit card companies are offering to lower interest rates, interest will still accumulate on ever higher balances.

Worse, some consumers will manage the crisis by taking on more debt. What is worrying is that much of the borrowing will be in the form of high-interest subprime debt, including payday loans and high-interest financing loans. Heavily indebted consumers were already relying on these types of loans to make ends meet before the crisis, and they are increasingly likely to do so now. Alternative lenders will see higher delinquencies and losses in the short run but may offset this financially with massive loan growth.

We may also see an increase in unsecured vehicle loan shortfalls. If you are off work, not driving, and can’t afford your car loan or lease, now might be the time to surrender your vehicle to the lender voluntarily.

Payments through the government economic response programs like CERB will offset some of the demand for more credit and default rates and many Canadians will also need to prepare for a potential tax bill for CERB payments.

It is too soon to predict exactly how high insolvencies will rise, how quickly and for how long. However, we do know that Canadians will experience fallout from the heavy burden of debt they carried into this crisis and that the tail will be long.