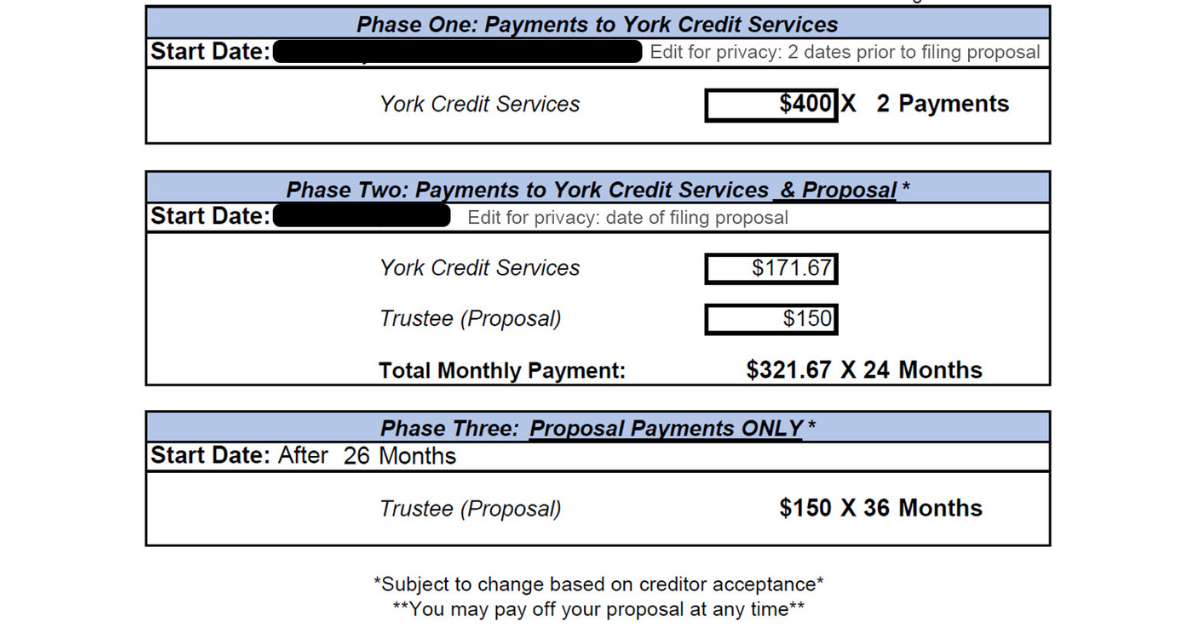 I’m saddened that we continue to receive calls and emails from Canadians who signed a contract with a non-licensed debt professional for assistance in choosing a consumer proposal, only to find that the costs of these services are harming them financially. This time it was York Credit Services.

As we have done in the past with other debt consultants, we will review the contract details as provided through our client (with their permission) to help others avoid unnecessary costs.  To protect our client, personal information has been removed from images taken from the York Credit Services contracts provided to us.

According to their contract, York Credit provides debt relief consultations, helps clients choose a ‘Third Party Professional’ and represents the client while implementing the chosen program.

In other words, they collect information, and when they suggest a consumer proposal, they refer you to a Licensed Insolvency Trustee.

For this review and referral, they charge a hefty fee.

How Much Does This Cost?

On top of this, the client would pay proposal fees to the Licensed Insolvency Trustee bringing his total recommended payments to $13,920 on unsecured debts (as listed in his proposal filing) of $31,010. 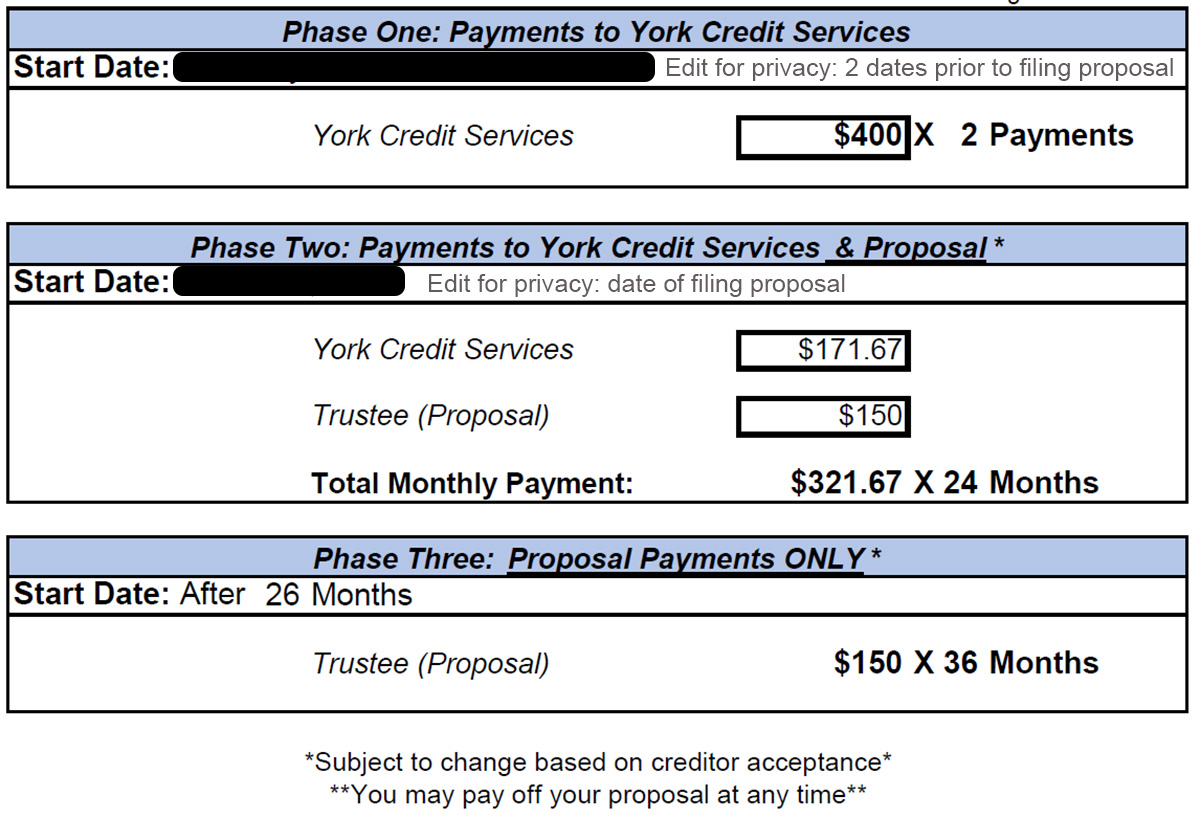 As many who read our blog know, a consumer proposal allows you to settle debts for less than you owe, and settlements as low as 20 cents on the dollar are possible. In this case, York Credit Services recommended monthly proposal payments of $150 a month payable over five years, or 29 cents on the dollar.

However, when you factor in their consulting fees, the total settlement cost increased to 45 cents on the dollar! That means going through a debt consultant increased the cost by 55%.

Whether the proposal payments of $150 a month were reasonable, I cannot determine as I did not conduct a debt assessment at that time. However, I can say that it was completely unnecessary for this client to pay an additional $4,920 for a referral to a Licensed Insolvency Trustee.

To be clear, Licensed Insolvency Trustees are required by law to conduct a complete financial assessment (more robust than the cursory services which appear to have been provided for by York Credit Services), and an LIT does so for free.  All reputable LITs provide free consultations. If you are not happy with the recommendation of one trustee, seek a free second opinion from another Licensed Insolvency Trustee.

As you can see from this scenario, debt consultants cannot get you a deal that is better than the one you can achieve going directly to a trustee, especially after factoring in their consulting fees.  Consultation fees by debt consultants can increase the overall cost by 50% or more.

Additionally, LITs do not require clients to make payments prior to filing a consumer proposal with the federal government. And when you work directly with an LIT, the ONLY payments required are those under the proposal, in this case, $150 a month.

This client continued to pay an additional $171.67 a month to York Credit because they thought these payments were required as part of the proposal process. They were not.

And yes, Licensed Insolvency Trustees do get paid to administer consumer proposals. That administration including filing the proposal with the government, collecting credit claims and counting votes, communicating with creditors, holding meetings if necessary, and making distributions to the creditors.

A $150 a month proposal for 60 months would result in total fees of $3,279 to the trustee plus costs (government filing fees and counselling fees) of $296.34.  I should also point out that Licensed Insolvency Trustees are regulated, and our fees are included in the monthly proposal payment. The creditors bear the cost since they receive a smaller distribution after the trustee has been paid.  Debtors do not pay extra.

That means, in this scenario, the Licensed Insolvency Trustee would be paid $3,279 over five years to administer the proposal while the ‘consultant’ was paid $4,920 to recommend a proposal! 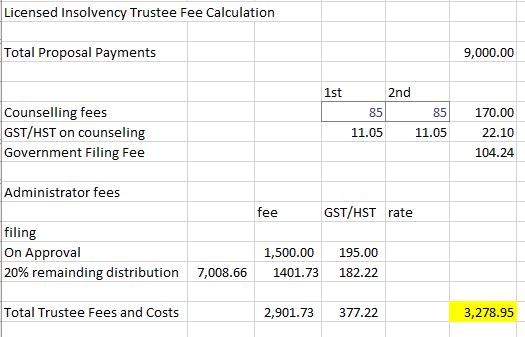 Also of note is a clause in the agreement prohibiting the client from retaining the services of anyone else conducting similar services, including consultations regarding their debt relief options. In other words, this contract tells a client they cannot engage another Licensed Insolvency Trustee since these are the services they provide.

While this clause may or may not be enforceable, it certainly capitalizes on the confusion, fear, and stress a client is feeling to prevent them from seeking a second opinion.

What happened in this case?

In this situation, the client filed a consumer proposal with another Licensed Insolvency Trustee in March 2021.  This was, of course, after paying $800 to the debt consultant prior to filing. They then continued to make payments to both the Trustee and York Credit for several months.

Unfortunately, the burden of paying an extra $172 a month was unaffordable, so this person turned to payday loans to keep up. To be clear, this person thought that these additional payments were part of the proposal. They did not know the charges by York Credit were not legislated payments.

After they contacted us a few months later, we advised that they stop all payments to York Credit while we conducted a new debt assessment. This individual then proceeded to file bankruptcy, which was a more affordable option for them.

Could this individual have afforded the $150 a month proposal? Perhaps, however, they could not afford those payments plus $800 upfront and another $171 a month on top of their proposal fees.

If you have contacted or signed an agreement with any debt consultant, we recommend the following to protect your interest:

We also recommend that the Office of the Superintendent of Bankruptcy:

Licensed Insolvency Trustees have many years of training and practical experience, are required to take many courses and pass many exams and are regulated by the federal government.  LITs are the only professionals that can file a consumer proposal or bankruptcy in Canada.  We are the professionals.  Our fees are set by the federal government.  We are not allowed to charge up front fees.

Don’t be scammed.  If you have debt, get a free consultation from a Licensed Insolvency Trustee, not an unlicensed debt consultant.

And I’d really like for the government to protect consumers by taking action to fix this problem.