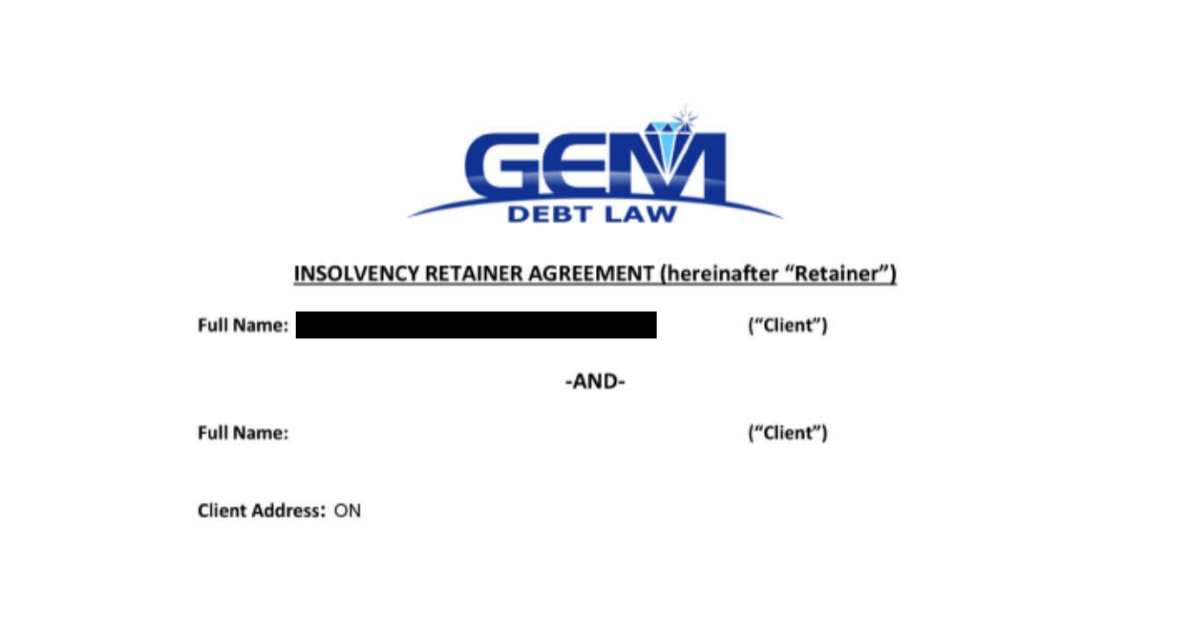 Who is GEM Debt Law?

According to their website, GEM Debt Law is an established debt settlement firm. They purport to be Licensed Professionals but not Bankruptcy Trustees. GEM indicates that they operate as a law firm.

Why is this important to know? Because in Ontario, debt settlement companies must be registered under the Collection and Debt Settlement Services Act (CDSS Act). This Act legislates fees and services of debt settlement companies. However, lawyers, not-for-profit credit counselling agencies and Licensed Insolvency Trustees are exempt from the requirement to be registered and thus are not bound by the CDSS Act. While LITs are federally legislated and bound by the Bankruptcy & Insolvency Act (BIA), lawyers and credit counsellors are not.

At the time we published this post we were unable to confirm where GEM Debt Law’s lawyers are licensed as their website listed their Senior Lawyer as Scott M. In this case, the individual who sent us the contract dealt with George Doufexis, Operations Manager. 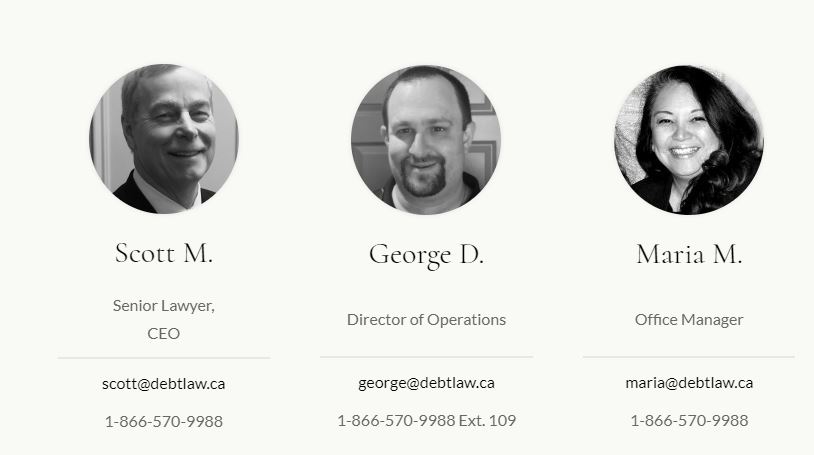 Since the publication of our initial blog post, GEM Debt Law has modified their website to include the lawyer’s full name, Scott Cook.  A search of the Law Society of Ontario as of January 2022 shows him listed as in private practice under the business name Cook Law LLP.  He is now listed on GEM Debt Law as Principal Lawyer.

What does GEM Law do?

As has become a common theme with these contract reviews, GEM Debt Law charges a fee to help individuals with insolvency filings. Specifically, their contract states that they act as a Legal Representative for filing a consumer proposal, Division I proposal or bankruptcy and help select a Trustee (Licensed Insolvency Trustee). 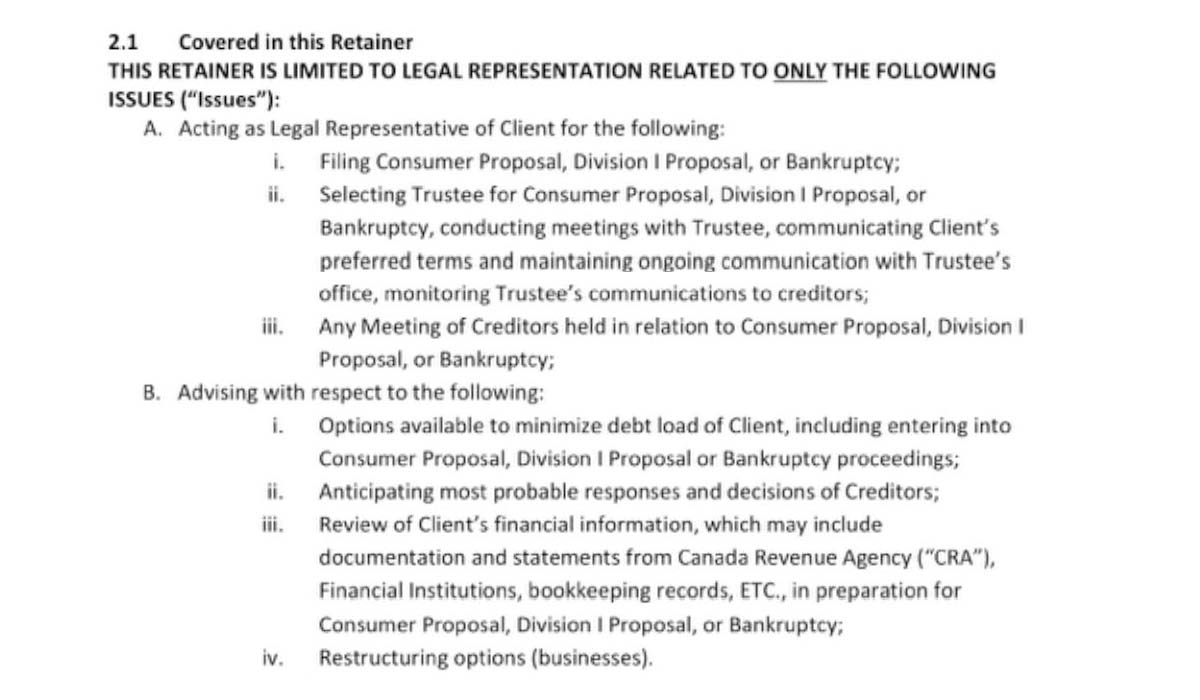 The question then becomes, do individuals need legal representation to help them file a consumer proposal, select a trustee or attend any meeting of creditors? In my opinion, in almost all cases, no. Filing a consumer proposal is a legal process, and LITs are licensed and trained in law and the regulations provided by the Office of the Superintendent (OSB) required under that process. LITs are Officers of the Court versed in the legal requirements of filing a consumer proposal. Interestingly, in Canada, lawyers are prohibited from being Licensed Insolvency Trustees.

So, what about any meeting of creditors? Should a debtor have a legal representative at that meeting? Again, in most cases, it’s not necessary. Firstly, not all proposals have a creditors’ meeting.  A meeting is only required if directed by the Official Receiver (seldom) or if creditors who hold a minimum of 25% of the debts request a meeting (again rare). If a meeting is requested, the purpose is two-fold:

Even if a meeting is requested, in my experience, anyone rarely attends. In most cases, the creditors simply don’t like the offer and wish for a higher payment. A new offer can be discussed and arranged before the meeting. If the debtor agrees, the new deal can be papered and sent, enabling a yes vote and eliminating the need for anyone to attend.

So, if you don’t need legal assistance in filing a consumer proposal, selecting a trustee or attending a meeting, what about the services where GEM Debt Law states they collect and review financial information, advise about debt relief options and anticipate the response of creditors? This is what is known as a financial assessment. Again, Licensed Insolvency Trustees are required by law to conduct this assessment and explain all options for dealing with debt to any debtor. The OSB has set out specific guidelines in Directive 6R3 stating what is required. Yes, a trustee can delegate the collection of information. However, most reputable trustees, including Hoyes Michalos, conduct this assessment in-house, for free, as part of the consumer proposal or bankruptcy process. There is no need to pay an outside third-party company to perform this assessment.

The last argument put forth by most debt settlement companies is that they can get a better deal because they work for the debtor.  In fact, on their website, GEM Debt Law states that “GEM’s fiduciary duty obliges us to serve the clients’ best interests, not the creditors or collectors”.

That brings us to cost. Let’s look at that.

What does this cost?

The $13,000 is marked as ‘Savings’ in the Pre-Authorized Payment Agreement sent to the client. However, Schedule A of the agreement notes that the Retainer Fee payment consists of GEM  fee plus taxes and bank/eft fees and a ‘Creditor Fee’ to be calculated based on the client’s total debt and projected savings on debt reduction.

These payments were to be paid as 60 equal monthly installments of $334.67, with the first two payments entirely going to pay upfront GEM fees, tax and bank fees.  The remainder was split between ongoing GEM fees and creditor payments for an additional 58 months, which we assume to be the proposed proposal term.

Again, the total cost to the client with GEM would have been a minimum of $20,080. This is assuming the deal as recommended by GEM was accepted by the creditors. While GEM states in their contract that they “shall strive to achieve the best results for the Client, such as the lowest monthly payment and significantly reduce debts owing to creditors,” they acknowledge that “results may vary and no guarantees whatsoever shall be implied within this Retainer”.

In other words, if the creditors do not like a lowball offer, the cost to the client will increase.  This is true with all consumer proposals. However, if the creditors ask for more after being referred to the Trustee, it appears GEM Debt Law fees will also rise. GEM also has what appears to be a clause allowing them to collect their fees in advance if the consumer proposal start date is delayed.

A first bankruptcy, for someone with no surplus income, can last as little as nine months and cost roughly $1,800 or $200 a month. If this were the situation, a client would still be required to pay $7,080 in fees to GEM versus $1,800 to file bankruptcy (including the trustee fees) unless GEM agreed to lower their fee.

Also in the agreement are several potential additional charges or fees, not included in the retainer agreement. One example is a $50 per credit report request, while we help clients obtain their free credit report as part of our process at no additional cost. I’ve attached an image of their fee schedules at the end of this post.

In this case, the individual was sufficiently concerned with the $7,080 in costs to be paid to GEM that they contacted our office for a second opinion.

After a full debt assessment, we recommended a consumer proposal of $250 a month for 60 months.

In this case, our client’s total amount payable over five years amounted to $15,000, significantly less than the $20,080 proposed by GEM Debt Law. With total unsecured debts of roughly $47,000, this amounted to a settlement offer of 32 cents on the dollar. I am happy to report the proposal was accepted by the creditors.

To date, we have reviewed several third-party ‘consumer proposal advisory’ contracts. You can see two recent posts here and here, along with a client testimonial here.

We continue to advise consumers facing debt problems to talk directly with a Licensed Insolvency Trustee, especially if the agency mentions bankruptcy, consumer proposal or debt settlement. It is vital to get advice about insolvency proceedings, for free, from a professional licensed to provide those services.

We continue to ask that the Office of the Superintendent of Bankruptcy: 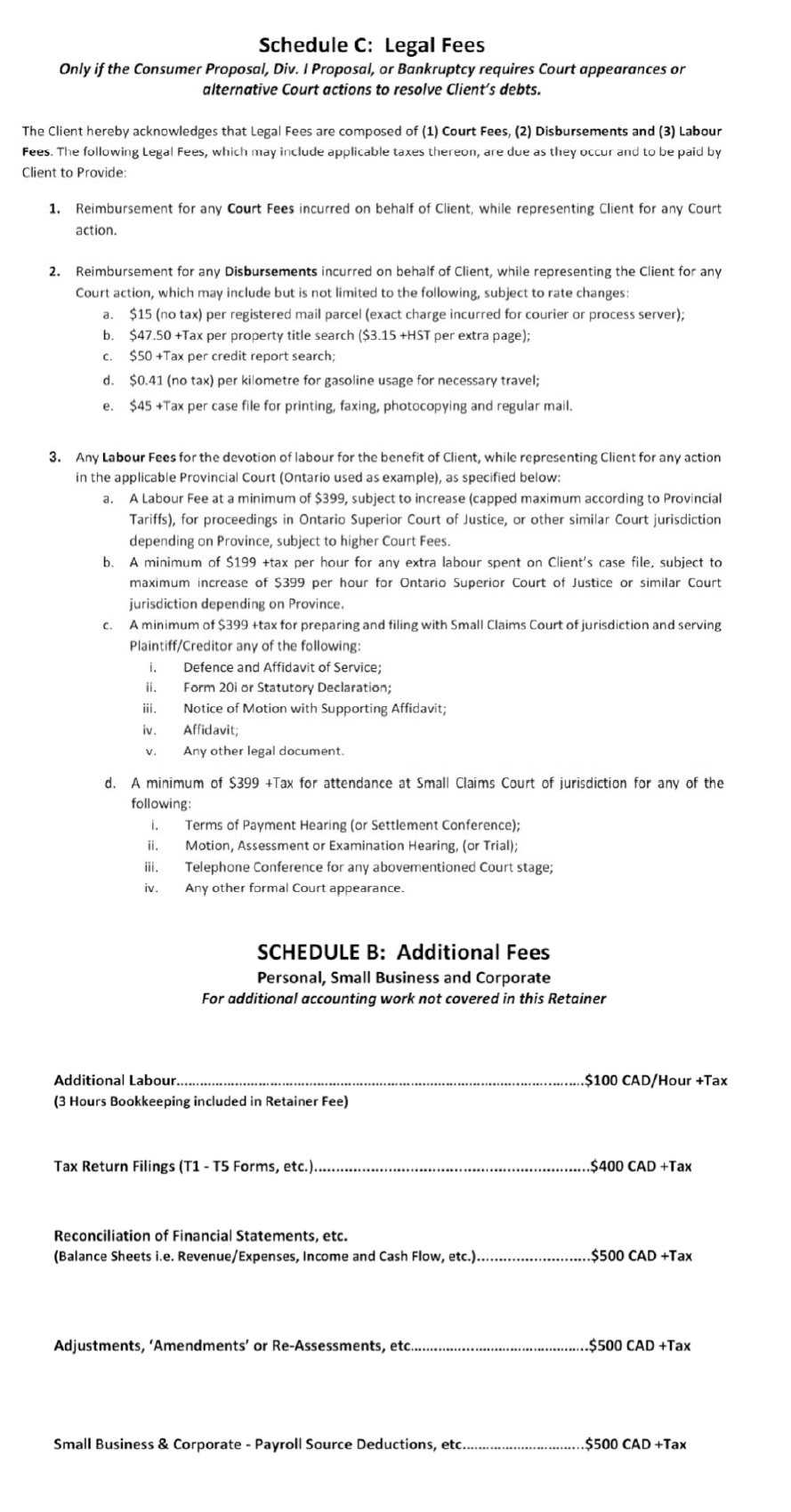