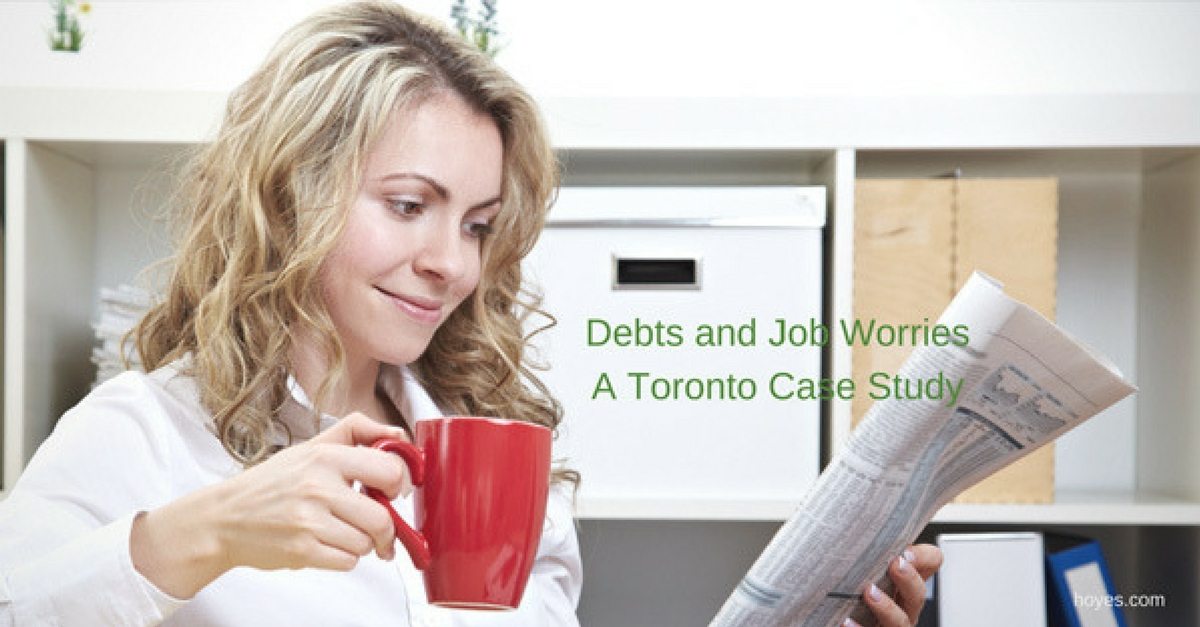 Whether it’s because you work under contract or your business has announced some closures, being concerned about the security of your job is stressful. Combine that with extra credit card debts and you worry about whether or not you will be able to keep up. You wonder whether you should act now, or wait until your situation becomes a little more certain. Here is one person’s story. We’ve changed her name and some details but this is a true story of someone we helped from our Toronto location.

Cynthia has worked in marketing since she graduated from school but was recently told that her employer would not be renewing her contract this time around. Cythia has no assets and no savings so doesn’t have anything to fall back on to get her through if she stops working. Although she began looking for work right away she was worried something may not come soon enough, or at her same pay level, to allow her to keep up with the rent on her Yonge & Bloor apartment and her debt payments.

Cynthia didn’t want to file for bankruptcy. Since new employers often ask to do a credit check as part of the hiring process, Cynthia was worried about what they might think if a bankruptcy appeared on her credit report.

Cynthia owed about $18,000 in credit cards. Her current income was around $3,200 a month – enough for her to keep up with her rent and minimum payments but she hadn’t really made much headway towards reducing her overall debts.

When we originally meet with Cynthia one of the first things we talked about was the urgency of her situation. With 6 months more to run in her employment contract she was able to keep up with her rent and minimum payments for now. A job loss or reduction in income however was going to make that almost impossible.

Because she really wanted to file a consumer proposal and avoid bankruptcy we worked with her to develop a contingency plan. This plan had a few pieces to it:

What’s important to learn from this case study is that no matter what, you always have options. When she left our office after her initial consultation Cynthia said that she already felt relieved. She appreciated having a plan and something to work towards.

Cynthia did end up finding a new job and did file a consumer proposal. She was able to eliminate her credit card debts within three years. Perhaps the threat of a job loss was just what she needed to take some action to deal with her finances.

If you are overwhelmed with debt, we give you options so you can eliminate your debt and rebuild your finances.  Contact us today for a free no-obligation consultation and talk with a Licensed Insolvency Trustee near you about how you too can become debt free.