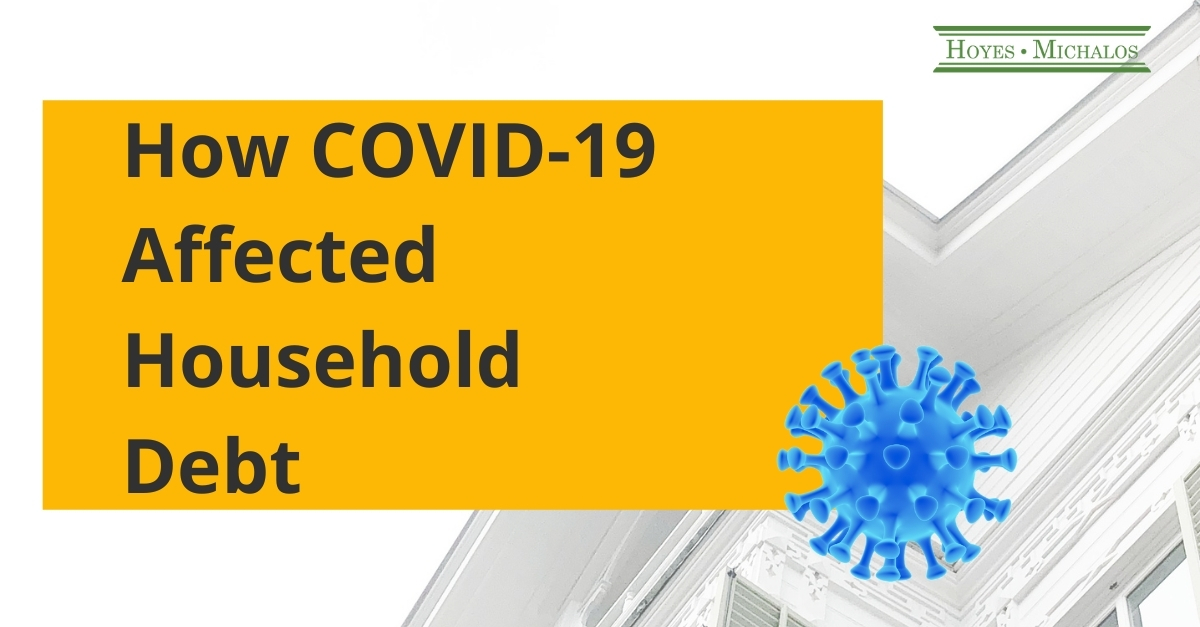 Normally at the end of every year I would reflect on how household debt fared throughout the year and choose ten statistics that tell the story. But this year, the debt story is complicated. Averages and year-end numbers don’t necessarily explain what happened.

The year began with growing insolvency filings and ended with record lows. Canada saw a rapid rise in unemployment offset by unprecedented government support programs. Millions of dollars in debt payments were deferred yet remain to be paid.

So, how do we make sense of it all?

In this year-end recap, I’m going to explore what happened in 2020 and what we think this means for indebted Canadians in 2021.

Debt before the lockdown

In the eight months prior to lockdown, Canada was facing steady growth in insolvency filings. Canadians were breaking under debt loads that had been rising for years.

A measure of overall indebtedness, Canada’s debt-to-income ratio was 180.4% (restated) going into the pandemic (Q1 2020). Total household credit at the end of February was still growing at an annual rate of 4.7%.

TransUnion reported that the average consumer owed almost $30,000 in non-mortgage debt. Average consumer debt per Canadian was down slightly from a year before, however, more people were carrying debt.

For comparison, my average client carries $59,000 in consumer credit at the time of filing insolvency.

At the end of February 2020, as the pandemic hit, household debt was still growing at an annual rate of 4.7%.

Credit performance was declining while consumer insolvencies were rising.

*Consumers with a balance

Canadians were struggling with rising living costs and credit exhaustion. The result was that both delinquencies and insolvencies were on the rise for months before the pandemic.

TransUnion reported non-mortgage delinquencies rose 7.21% in the first quarter of 2020 compared to the year before and 2.48% from the previous quarter. Delinquencies had, in fact, been rising steadily since the end of 2018.

Year-over-year, consumer insolvencies across Canada and Ontario had increased for 17 straight months before the pandemic hit.

While economists were predicting the possibility of a recession for some time, no one thought it would be a global economic shutdown. Virtually overnight, Canada had to adapt to a new normal.

Canadians experienced massive layoffs, and in just two months, unemployment reached a high of 13.7% (May 2020). Almost 40% of the workforce was working from home by the end of March 2020, and non-essential businesses closed, crippling spending even further. While the personal savings rate soared to an all-time high of 28.2%, this did not reflect an improvement in many Canadians’ financial health.

Indebted Canadians already strapped for cash were at their wit’s end. In the first few weeks of the shutdown, a financial hardship survey conducted by TransUnion (April 6th, 2020) indicated that 63% of households felt COVID-19 impacted their income, and 68% of those were worried about paying their bills.

CERB and its effects on income

With so many Canadians living paycheque to paycheque, job losses at this scale would have destroyed Canadian households without some form of broad income support. The Canadian government responded with federal program creation, most notably the Canada Emergency Response Benefit (CERB).

To help Canadians weather the financial impact of such massive job losses, the government allowed eligible Canadians to receive $2,000 every four weeks between March 15th and October 3rd. By the end of the program, 9 million Canadians (1 in 3 adults) accessed the CERB and collected $81.6 billion in income payments.

To help preserve jobs, the government also introduced the Canada Emergency Wage Subsidy (CEWS), initially subsidizing up to 75% of employee remuneration, an amount reduced to 65% for later periods. As of December 13, 2020, we estimate approximately 6 million employees received wages subsidized by CEWS or 1 in 5 adult Canadians.

With most Canadians living paycheque to paycheque, job losses would have been crippling without income support. The Canadian government responded with new emergency response programs.

In aggregate, we estimate almost one-half of adult Canadians received some amount of income support during the pandemic.

While we recognize that some Canadians may have received CERB and worked with wages subsidized by CEWS at different times, in aggregate, we estimate that close to one-half of adult Canadians received some level of benefit from these two programs.

The result was a growth in household income of 11% in the second quarter of 2020 despite a drop in employment earnings of 19%.

Combine this with a reduction in savings, and it looked like Canadian household finances were doing better during the pandemic. Unfortunately, statistics explain how Canadians are doing collectively, but what they did not explain was that some Canadians were doing better, while others were still struggling.

The income group most squeezed financially by the lockdown was the middle class.

For many middle-income earners, neither the CERB nor a spending reduction was enough to allow them to make ends meet in the crisis. Middle-class households were at the greatest risk of using debt to make up for a cash shortfall. In fact, we expect that the middle-income debt burden will increase as a direct result of the lockdown.

COVID-19 affected mostly lower and middle-income earners. For those earning less than $500 a week, CERB may have provided a boost in total income. Middle-income earners who lost their job though saw only a portion of their income replaced by government support benefits.

Our average client earns a weekly gross income of $771, and two-thirds earn between $500 and $1,199 a week. In other words, people who file insolvency are middle-income. The drop in wages and shift to CERB, which cannot be garnisheed, contributed to much of the decline in consumer insolvencies.

Wages between $500 and $799 have still not returned to pre-pandemic levels, partially explaining why consumer insolvencies remain well below norms.

Many struggling households were able to take advantage of further financial support in the form of debt payment deferrals.

Banks and lending institutions launched massive deferral programs, and most requests were granted. This was another first for debt management, and more than 3 million consumers (11% of Canadians) deferred at least one payment.

While mortgages accounted for the most balances deferred, Canadians deferred payments across the entire spectrum of lending products, including credit cards, installment loans, auto loans, lines of credit and trade accounts.

Banks and lending institutions launched massive deferral programs to help reduce the risk of default. While mortgages accounted for the majority of balances deferred, Canadians deferred payments on credit cards, installment loans, auto loans, lines of credit and trade accounts. The result was a dramatic drop in delinquencies across all credit products.

% of Canadians with a Deferral11%

While popular and used widely, deferrals only offered a temporary reprieve from debt repayment obligations. They were not debt forgiveness.

We can credit deferral programs for a temporary reduction in debt delinquency rates. TransUnion reported an average year-over-year drop in delinquency rates of 25% in the third quarter of 2020, with reductions across all credit products.

Deferrals gave Canadians time to breathe by kicking the debt can down the road. Some were even able to use their deferred mortgage or car payments towards paying down other unsecured debts. But overall, deferrals will lead to higher debt balances once they have expired, as interest charges accrued for most debts in the deferral period.

Mortgage deferrals, combined with lower interest rates, pushed homeowner insolvencies even lower. Our Homeowners’ Bankruptcy Index averaged 4.9% in 2020 and reached a record low of 2.6% in October but has bounced back to 5.1% in November.

Consumer insolvencies were put on hold

Unlike previous recessions, this one was unique because everything was closed — no courts, no debt collections. So, while debt was very much a problem for borrowers, there was almost no pressure to make payments. Canadians were largely creditor proof.

As such, we advised callers who faced a reduced income to focus on meeting their immediate needs: shelter, food, utilities, and to deal with debt when the economy re-opened. Only those who had job or income security were filing a bankruptcy or consumer proposal.

Insolvencies in Canada had been increasing rapidly for more than a year. COVID-19 changed all that. Courts closed. Collection activities stopped. Canadians were largely creditor proof. By May, consumer insolvencies in both Canada and Ontario reached lows not seen in 20 years.

Consumer insolvencies in both Canada and Ontario reached lows not seen in 20 years. Eight months into the pandemic, filings are down 38.4% from the previous year across Canada and 33.2% lower in Ontario.

Predictions and financial challenges for 2021

Our inability to spend combined with income supports pushed the household debt to income ratio down to 162.8% (revised) in the second quarter of 2020. This dramatic dip, however, was temporary.

By the third quarter, the ratio rebound to 170.7% and, while not yet at pre-pandemic levels, we expect the number to continue to rise.

New household liability data released by Statistics Canada shows non-mortgage loans (debt used largely to fund consumables) has increased steadily since May 2020. At $793.5 billion as of October 2020, non-mortgage debt has rebound and is now just 1% below pre-pandemic levels of $802.2 billion in February 2020.

Where Are We Headed

Household debt indicators like the debt to income ratio and debt service ratio ticked up in Q3 as spending rebound and deferred payments resumed.

Non-mortgage borrowing by households has risen steadily since May 2020.

Headwinds are not in favour of Canadians carrying debt:

Of particular concern to us is that while CERB payments helped alleviate immediate stress, CERB was pre-tax income that will result in an unwanted tax bill for many households to deal with next year. In addition, the rollout was fast and fraught with confusion, with ineligible CERB recipients being required to repay some benefits.

2020 was unlike anything we have ever witnessed. For years I, and other money management experts, have warned Canadians of the risk of an unexpected catastrophic event. And then it came in the form of the Coronavirus. We don’t know if this crisis has created a permanent shift in how much debt people are willing to take on. A look at the recent mortgage market seems to indicate that it is not likely.

Will consumer insolvencies rise or fall in 2021, and by how much?

The answer depends largely on how quickly the economy recovers and people return to work but there is certainly a lot of instability and uncertainty for the foreseeable future.

If a vaccine is successfully deployed in the first few months of 2021, and businesses can reopen, it is likely that personal insolvency filings will begin to increase in the spring of 2021. The inflection point will likely be the month of April, as with the warmer weather and partial vaccine deployment case counts will hopefully drop, and more people permanently return to work.

But April is also tax filing month, and if the 9 million recipients of CERB are faced with tax bills rather than refunds, this will place more upward pressure on consumer insolvencies.

A third factor will be small business bankruptcies. In 2018, more than half (53%) of Canada’s jobs were driven by private small businesses. Pandemic shutdowns have certainly taken a toll on many of Canada’s entrepreneurs. While government loans, wage subsidies and a problematic rent subsidy were available, many small businesses won’t survive long term, reducing employment opportunities until the economy can rebuild. On the flip side, surviving companies and industries will need to restock and re-invest to fully recover and grow. Many won’t start though until the economy is more certain.

In other words, insolvencies will return as the economy recovers. It seems counter-intuitive to many, but if you don’t have an income or assets that can be seized by creditors, there is no need to file insolvency. I do not, however, believe that the pandemic solved our structural reliance on consumer credit. Until economic growth is no longer driven primarily by consumer spending paid for with debt, until more Canadians can stop living paycheque to paycheque and using credit to survive, consumer insolvencies will inevitably return.